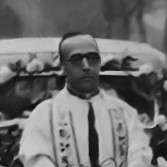 Helping those in need was the meaning of Father Raymond Voegeli’s life. Before the war, he was a member of the Camillians, whose main mission was ministering to the sick. He worked in his native Alsace, a region in eastern France bordering on Germany. He headed the parish in Fréland in the Vosges.

Having conquered France in 1940, the Germans incorporated Alsace into the Third Reich, but the occupation did not disrupt Father Voegeli’s mission. He became involved in the nascent French resistance movement and helped young Alsatians avoid conscription into the Wehrmacht. In those difficult wartime circumstances, he became the leader of his community.

In 1941, the Germans established a camp for Polish POWs in Ursprung near Fréland. Father Voegeli got to know the Poles as, with the permission of the guards, they attended mass in his church on several occasions. He became close friends with Franciszek Urbanik.

Following the Allied landing in Normandy in June 1944, the prisoners found themselves in danger. Week by week, the frontline was moving closer to Alsace and the Germans intended to liquidate the camp. Then Father Voegeli decided to organize an escape. After one of the masses, he presented his plan to Franciszek Urbanik. He also convinced the Gorius family from his parish to provide shelter for the escapees.

The Poles escaped from the camp on the night of 26 August 1944. The Gestapo participated in the search for the fugitives, and the Germans threat-ened the locals with severe repression for helping the prisoners. Father Voegeli would then address his parishioners from the pulpit: “You know what I want to ask of you.” In response, the church filled with food parcels for the fugitives.

The Poles hiding at the Gorius farm lived to see Fréland liberated by the Americans at the beginning of December 1944. In recognition of his heroism, Father Voegeli was elected the first postwar mayor of Fréland. He headed the local parish until 1952, and in 1972 he retired in nearby Kaysersberg.

In 1944, in August, the entire camp – about a dozen Polish POWs –  ran away. The escape was prepared by the local parish priest with the help of virtually all residents. Feeding these people in wartime was very difficult, as there were food stamps. When Father Voegeli mounted the pulpit on Sundays, he said: ‘You know what I want to ask of you’ – they knew that he meant food and brought everything they had to provide the prisoners with food and shelter.

Interview with Stanisław Urbanik, son of the rescued Franciszek Urbanik, for the County Office in Brzozów.