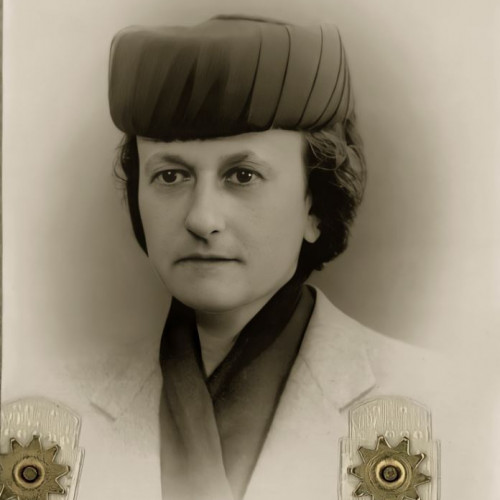 Edith Weiss came from the family of Hungarian industrialists of Jewish origin. Her father, Manfred Weiss, received the title of baron from Emperor Franz Joseph in recognition for providing supplies to the Austro-Hungarian Army. Edith grew up in affluence, but also in the atmosphere of respect for anyone in need. From a young age, she became engaged in charity work. When the war broke out, she turned her attention to the thousands of Poles who sought shelter in Hungary.

In 1939, Weiss joined the Hungarian-Polish Refugee Welfare Committee. It brought together social activists from among the Hungarian elite who wanted to help Polish refugees. Edith worked in a unit that was responsible for employment matters. She made it possible for Poles representing various professions to leave internment camps by offering them jobs in France or even Iraq – countries which, at the beginning of the war, were considered safe and free of German influence. On her own initiative, she sent out recruitment forms to the internees, though following intervention from the military authorities she had to stop. Nevertheless, the privileged status of an aristocrat still opened many important doors in Hungary. In this way, Edith strove to improve the lot of Polish escapees.

Apart from her involvement in the work of the Hungarian-Polish Refugee Welfare Committee, Weiss furthered the interests of numerous Jewish organ-izations in Hungary and cooperated with representatives of the International Committee of the Red Cross. She intervened on behalf of Polish Jews in Hungary, protecting them from deportation and striving to improve their living conditions.

When the Germans occupied Hungary in March 1944, the Countess and her loved ones faced deportation to Auschwitz. They ransomed themselves with the entire family fortune and in May 1944 left Hungary for neutral Portugal. Edith, thus saved from the Holocaust, moved to the US after the war. She never visited her homeland.

In October 1939, the Ministry of Internal Affairs proceeded to launch a scouting center, designating for this purpose an imposing manor in Somló-Szöllős that could hold about 100 people. With the help and guidance of professional workers, the youth quickly adapted the allocated space to the needs of the center and first classes were held there in November 1939. It is also where the first Polish middle school in Hungary was established, this with immense organizational help from Edith Weiss, who was later forced by the Ministry of Internal Affairs to abandon all social work due to German pressure, as she was of Jewish origin.

Lt Col Marian Chomrański, Chair of the Polish-Hungarian Scouting Club and representative of the interned Polish soldiers in the Kingdom of Hungary, 10 December 1947, Budapest.