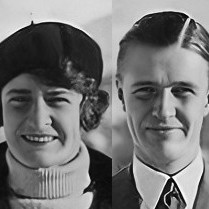 Erzsébet and Antal Szápáry came from a famous family of Hungarian aristocrats. Their mother, Maria Przeździecka, was a Pole, and this fact had a bearing on their involvement in relief activities for Polish refugees after 1939. The siblings were members of the Hungarian-Polish Refugee Welfare Committee, which since December 1939 was one of the most important welfare organizations that took care of Polish civilian refugees in Hungary. Countess Erzsébet Szápáry headed the camp affairs department, which dealt with administrative issues at civilians camps and helped the refugees solve their everyday problems, e.g. by providing supplies of clothes and shoes. The Countess also made numerous visits to the camps in order to personally oversee the conditions in which the Poles were living.

Erzsébet was not afraid to take risks. She discreetly assisted in the evacu-ation of interned Polish soldiers to the West. In December 1943, she traveled to Warsaw to fetch the family of Henryk Sławik – his wife Jadwiga and daughter Krystyna. She handed them Hungarian passports issued by Henryk’s associate, József Antall. In 1944, when Jews faced the worst persecution in Hungary, Erzsébet arranged the apostolic nuncio’s visit at the center for children in Vác. In this way she saved the Jewish orphans from Poland from deportation to Auschwitz.

The Countess received help from her younger brother Antal, who worked as a liaison between the Hungarian Red Cross and the International Com-mittee of the Red Cross. Both these institutions delivered gifts and parcels to Polish refugees.

When the Germans occupied Hungary in March 1944, the Szápárys had to stop their rescue operation. Erzsébet managed to hide at the Turkish embassy and then left Hungary. Antal was less fortunate – he was sent to the Mauthausen concentration camp. He was released five months later following intervention from the Swedish Prince Gustav Adolf. After the war, the siblings lived in exile.

Erzsébet Szápáry pointed to the armchair, inviting me to sit down, and said gently: ‘I heard about your tragedy. How can I help the Polish refugees, with whom we sympathize on the basis of the traditional Polish-Hungarian friendship?’ This was a very promising start. I had not yet spoken and she had already given our conversation a positive turn. It was only on this general level that the Countess, head of the Hungarian-Polish Refugee Welfare Committee, could help solve our problems.