The subject matter of the present batch of articles is focused along a number of topical axes. As regards the period immediately preceding the German and Soviet invasion of Poland, Wojciech Łysek discusses the question of the Polish Promethean struggle in the east of Europe in correlation with the fall of the Second Polish Republic. The next author, Marek Rodzik, presents the genesis of the British guarantees for Poland of March 1939, opining that the main reason for their granting was Adolf Hitler’s violation of the Munich Agreement. British-Polish co-operation – despite the non-provision of any tangible assistance to Poland once it was attacked by Germany – was continued in successive years, also in the field of special operations, and this has been described in detail by Anna Zapalec and Jacek Preface 307 Preface Tebinka. The aggression of the Third Reich against Poland was characterized by exceptional brutality, while the crimes committed by the Germans clearly showed that territorial conquest was not their primary objective, as Roger Moorhouse convincingly argues. Tomasz Ceran has conducted an analysis of one such crime, duly placing it in the context of genocide, while Mikołaj Getka-Kenig reconstructs the process of destruction of the historical architecture of Kraków under the German occupation. Our next author, Marcin Marcinko, explains that the “voluntarism” which characterized the crimes and atrocities of the occupier did not fit into international legal standards, while Stephan Lehnstaedt outlines the problem of the German historical memory of crimes committed during the invasion of Poland. When discussing the multifarious aspects of the effects of war, we cannot forget the military defeat of the Polish Army, which necessitated its reconstruction abroad. The fates of Polish soldiers were varied. Some even found themselves in South Africa, and Paulina Stanik describes how this distant country was perceived by contemporary Poles. Obviously, the Second World War was a total conflict that left hardly any geographical area unscathed. Tunisia was no exception; initially taken over by the Vichy régime, which actively collaborated with the Third Reich, it was subsequently occupied by German and Italian forces. Mohsen Hamli analyzes how the country’s Jewish newspapers viewed the anti-Semitism propagated by the Third Reich and its allies, and how this ideology impacted the situation of Jews in Tunisia itself, whereas Habiba Boumlik touches upon the memory of anti-Jewish repressions in Tunisia. The next author, Ákos Bartha, has elaborated a broad presentation of anti-Nazi policy in Hungary – a country that was officially an ally of the Third Reich. The final research article, written by Maciej Zakrzewski, concerns the discussions which took place in the Weimar Republic on the issue of coupling technological advances with the masses. The yearbook is rounded off with Agnieszka Konik’s miscellany text, which constitutes a summary of the research project conducted by the Institute. Using the context of post-memory, she discusses the data provided in questionnaires completed by members of the families of persons commemorated under the “Called by Name” project. 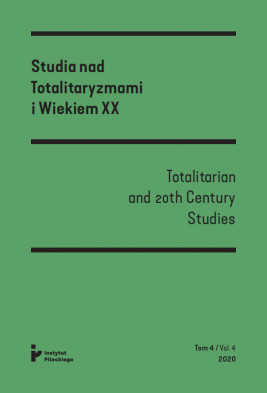 Go to our store
SCIENTIFIC COUNCIL: